Everything in this visible world is woven by invisible threads of forces in geometry. This very belief raises curiosity in Architects and Planners as a parametric enquiry of form finding, governed by nature’s laws that connect both visible and invisible. The discovery of sacred geometry and golden section gave way for different approach towards architecture and planning. These gave an extra precision on mimicking the geometries of nature to attain sustainability and eco-effective solutions; called bionic architecture, which in latest trend is called parametric architecture – everything as parameters which will affect evolution of form, not as one but deriving many possibilities. Such an observable geometric pattern in nature is Voronoi Pattern. It explains certain geometries observed in nature; in visible things which include leaves, wings of dragonfly, carapace of a turtle, honey comb, skin, it goes on; and in invisible things which includes personal space, service area, economic areas of similarity, and so on. These observations increase the curiosity to use it as a tool to attain sustainability in architecture and planning.


Sustainability is an impact network. Today people are alert with resource depletion and energy usage, as they are conscious of their survival, individually and socially. So, when society becomes sustainable the individual will, and vice versa. (See Fig: 1) 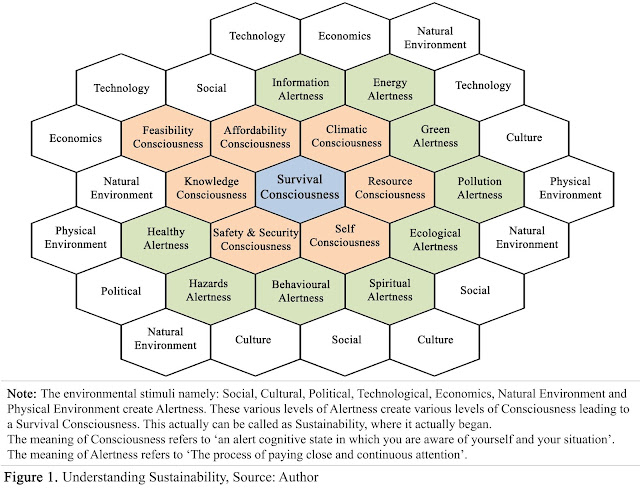 Role of Technology in Sustainability
Technology has greater impacts on Sustainability with respect to its use in controlling built environment performance, through optimizing various contextual factors with the help of artificial intelligence to provide optimal conditions for human wellbeing in its widest sense while using minimum non–renewable resources.

About Voronoi Pattern
It is an algorithm, used to divide a multi-dimensional space into sub-spaces with respect to central nodes by defining bisect vectors as center of sub-spaces. It is used for representing natural phenomena through multidimensional geometrical modelling. This algorithm has been used for structural and spatial derivations.
Dated use of Voronoi diagram is on 1644 to Rene Descartes. In 1850, Lejeune Dirichlet used in his studies of quadratic forms used 2D and 3D charts of Voronoi. British doctor John Snow in 1854 used it to represent distribution of deceased people. Georgy Voronoi, in 1908 he conducted research on  n-dimensional shapes and he defined them. It is also known  Voronoi tessellation, Voronoi decomposition or Dirichlet tessellation.
It is an organizational phenomenon that sometimes named as ‘nature’s rule’. It has potential to derive attractive and non-repetitive complex geometries (See Fig: 4; Pattern:  5 – 20 & Fig: 7; Pattern: 4 - 9). This  can be recreated by using; Incremental Algorithm, Divide and Conquer Algorithm, Chain Algorithm, Fortune’s Algorithm, sweep Algorithm and 3D Projection Algorithm.

It is used to search the nearest neighborhood, determining position function (nodes), finding largest empty circle (cells) and path planning (edges) and many including architectural design and urban planning. 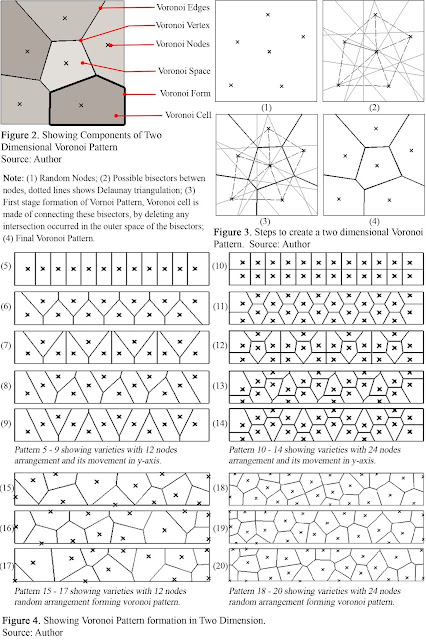 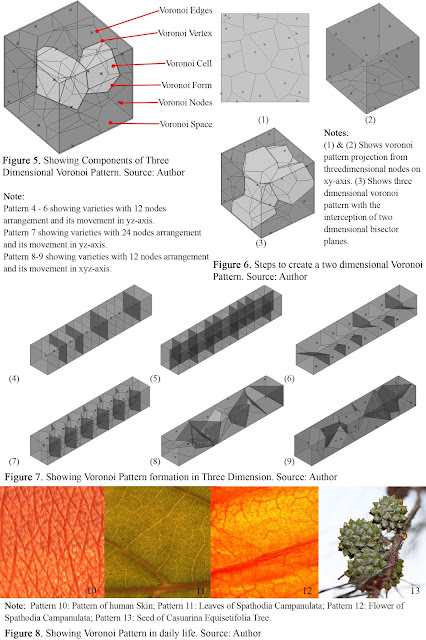 1. Applications in Architecture
The task of architecture is to create intelligent spaces. Voronoi patterns can be modelled by the use of parameters to build spatial relationships. Architects such as Toyo Ito, Fuller or Frei Otto were inspired by formation principles, geometries, spatial effect and constructions in nature (Friedrich, 2008). 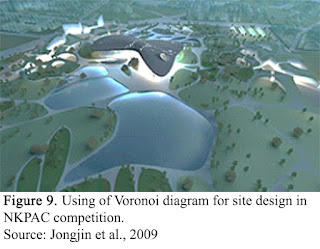 Spatial organization and public progression through site are derived from Voronoi pattern. It is used as a strategy to analyze the relationship between environment and site elements (local treasured trees, historic buildings and site boundaries). The resultant design became site responsive and coherent with individualistic boundaries.

1.2. Tulum Museum in Mexico by Andrew Kudless
As an extremely important archeological site, the primary concern at Tulum was minimization of human impact over landscape and historical artifacts. This was achieved through relocation of museum site to align with the existing circulation. This location avoids clearing large areas of forest as well as places between existing entrance and exit to the ruins. The solution was to choreograph a spatial rhythm to utilize the empty spaces between spatial nodes using Voronoi pattern. 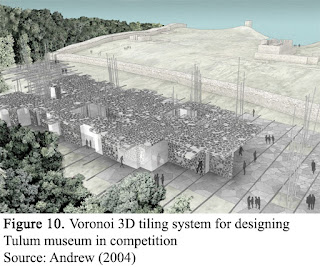 The structure relates directly to the stone aggregate walls by use of 3D Voronoi tile system: it could be considered as the materialization of voids between the individual stones. Thus, the museum structure refers to the existing tectonic yet renders it lightweight and airy. It is the invisible made visible.

1.3. NetLab by G_nome, London, 2006
This is 16 months research on Parametric Architecture using algorithms to generate a variety of solution forms in real contexts, to redefine the architect’s role by integrating design, analysis and production as a whole formal process which gives an iterative process on feedback, adjustment and optimization of design. Voronoi algorithms are used to express different social systems, scale and needs of the users. 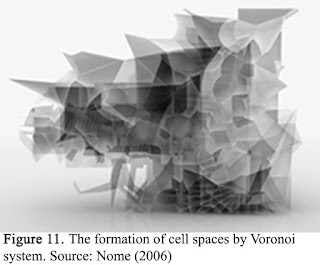 This research would not be a replacement to the designer nor an automation of design process, but rather it represents an open framework where designers can develop more integral relationship between various conflicting and overlapping issues of architectural projects, as it connects different working-patterns as a non-linear network.

1.4. National Aquatics Center (Water Cube)  at Beijing
It was built alongside Beijing National Stadium in the Olympic Green for swimming competitions of 2008 Summer Olympics. Despite its nickname ‘Water Cube’,it is not an actual cube, but cuboid (a rectangular box) of 178 meters (584 ft.) square and 31 meters (102 ft.) high, specially designed and built by consortium made up of PTW Architects (an Australian architecture firm), Arup international engineering group, CSCEC (China State Construction Engineering Corporation), and CCDI (China Construction Design International) of Shanghai. The Chinese partners felt a square was more symbolic to Chinese culture and its relationship to the Bird's Nest stadium, while the Sydney-based partners came up with the idea of covering the 'cube' with bubbles, symbolizing water. Contextually the cube symbolizes earth whilst the circle (represented by the stadium) represents heaven.
The outer wall is based on Weaire–Phelan structure. The complex Weaire–Phelan pattern was developed by slicing through bubbles in soap foam, resulting in more irregular, organic patterns than the structures proposed by scientist Kelvin. 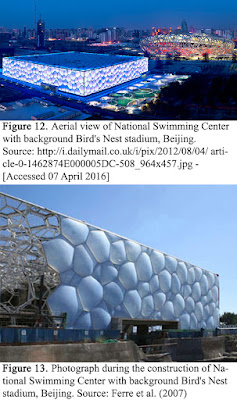 1.5. Activity programming with personal space
Territorial Behaviour of Animals and Vegetations are observed as Voronoi Pattern. If all the subjects settle in same time, then distribution of Voronoi centers can be Centroidal Voronoi tessellation.
In an experiment illustrated by G. W. Barlow, in his book ‘Hexagonal Territories, Animal Behavior’, the territories created by male Tilapia Mossambica fishes inside a polarizing filter, digging sand pit formed a pattern of polygons similar to Voronoi pattern. 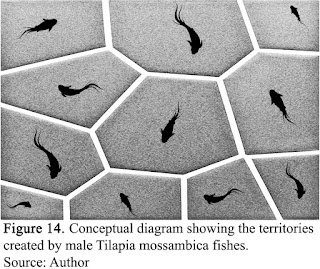 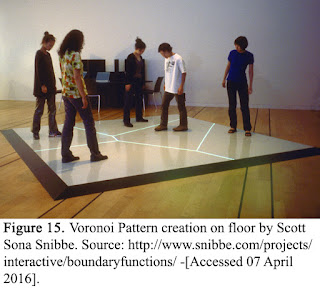 The task of planning is to locate services and infrastructure requirements of a region. For example, to check the convenience of mailbox placement throughout a population, taking assumptions:
• A person will use the mailbox nearest to their home.
• The cost to a person for using mailbox is a function of the distance in between.
• The optimal placement of mailboxes is one that minimizes cost, or distance to population in general.
Central nodes obtained will tell location of mail boxes in the region. 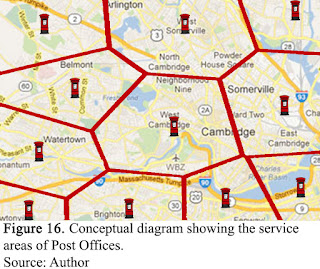 The very idea can be used in many different aspects of urban and regional planning on the placement of resource, utility and service infrastructures.

Conclusion
Architecture and Planning are increasingly becoming simulation to implement complex relationship with environment. There are many reasons and benefits for its use: deriving structural properties; organization of space based on neighborhood and closeness proximity; many natural forms can be described with the help of these diagrams to create systematic design process for urban design.

Acknowledgements
I extend my gratitude to my students who helped me with the works namely: Pugal Varma and Fathima Shahzadi Kurikkal M P.

Popular posts from this blog

The Final Grasshopper definition is given below.

It is a nice flowy structure, of course not a box. Really?

This is the simplest concept sketch of the form. Finding the mid points followed by creating interpolate curves and then loft surface. The details of development is given below:

VIJESH KUMAR V
I see patterns, everywhere in fact. Solving those is my passion. Nature is the pattern of patterns. Let us all work together to solve it. Have a great time!